We’re excited to bring you another tale from our Big FAT Love Series! Today we’re sharing the story of how Siobhan and Frank found love and each other online over 30 years ago.

In 1988 I was 23, living in Juneau, Alaska, and spending a lot of time on a computer network called Q-Link. This was before the internet and before the online games and chatrooms of Q-Link would eventually became America On Line (AOL). I enjoyed role play games and chatting in a place called the Red Dragon Inn, that’s where we met. We met in a game, and started chatting privately. Then making phone calls. Then sending letters and cards.

Photo by Bryan Goff on Unsplash

Frank lived on Long Island, New York and after eight months of getting closer and more romantic from a distance, I asked if he’d be willing to move in with me. I also needed a new roommate to help cover rent so it was practical solution. We knew couples who’d met through Q-Link and their relationships didn’t work. So we knew there was a good chance that it wouldn’t work out for us. We decided if it didn’t work romantically, we still had plenty of things in common to be roommates and friends. He started making plans to move to Alaska.

Photo by Heather Shevlin on Unsplash

We spent the next couple months planning. He worked overtime to make enough to ship his belongings and to save as much as possible before moving. The most reasonably priced way to get to Juneau is on the Alaska Marine Highway. I’d done it when I moved up from Minnesota and he decided to do the same. He arrived in December, and Juneau was full of slushy snow. We’d never met face to face. All I had was a bad photo one of his friends had taken. All he had of me was a Polaroid that only showed my face.

Siobhan and Frank circa 1989

I recognized him immediately as I saw him walking off with the on-foot passengers. He was awkwardly carrying a cassette tape case with two hand as he looked around. I walked up to him, smiling but shy. His eyes met mine and he dropped the cassette case into the slushy snow. The reason he’d been holding it awkwardly became apparent when the latch that was broken gave way and his cassettes flew out of the case. He was so embarrassed. He immediately started gathering up his tapes and apologizing to all the people walking around him. He was so cute, so thoroughly vulnerable in that moment, that I fell in love with him right then. Though, really, I’d fallen in love with him in the months before. Seeing him in such a moment cemented those feelings for me. I smiled and went to help retrieve the tapes and wipe them off.

Siobhan and Frank in Amalfi, Italy in 2012

We eventually made it back to the car I’d borrowed from a coworker and loaded up his things. I gave him a big hug, then kissed him, right there, in the snow, under fir-covered mountains that surround the ferry terminal. I think it took him a few hours longer to figure out that he loved me, too. We’ve been together 32 years this year and we’re celebrating our 30th wedding anniversary in September! 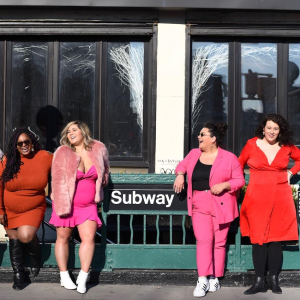 Fat and In Love: Plus Size Love Stories