Recently, I received boxes of my childhood things from America that were full of random memories and things. It felt surreal going through these mementos as a 30-something-year-old in Bristol, United Kingdom. For the first time in a long-time, I have all my things in one place and it’s not a lot if I am being honest. As a daughter of a former US Diplomat, moving every 3-4 years was my norm with summers spent at my grandparent’s house in Virginia which is where the surviving things were kept until recently. I spent almost every summer with my grandparents except one which I was reminded of due to uncovering letters from that time…letter’s from fat camp.

I sent a text to my mom asking her if she remembered when I went to Camp Pennbroke and if so, does she remember how that came to be? She took a long time to reply. She’s usually not a slow responder, it could be 2 AM and somehow she responds within seconds. I understand why she took her time. She was most likely scared of the “why” I was asking and I can’t blame her.

It hasn’t been easy on her for me to talk about my childhood and being fat as a kid, especially in a public space. She blames herself and I used to as well but, to be honest, we were both the products of toxic diet culture that told us thin was beautiful. She wasn’t just to blame and I have forgiven her and my family members who were part of that trauma but between you and me, I hadn’t forgiven myself. Until now.

I clearly remember the day I got the brochure from Camp Pennbroke, I was enthusiastic. I was in disbelief that I, Amanda was getting to go away for a true camp experience. The bonus was I’d also lose weight, right? YES, the dream!

“Camp Pennbrook campers have fun and learn healthy eating habits for a healthier lifestyle. Our programs, for girls aged 8-21,  provides daily exercise, emotional support and, rap sessions, where the girls learn to eat correctly while improving their self-esteem. Our certified health coach will focus on body positivity, setting goals, and feeling good about yourself.” – From the current website

Even now, 15+ years later Camp Pennbrook is still running but seems to be taking a “wellness” approach *insert eye roll*. Anything that says “Camp Pennbrook: More Than Just a Weight Loss Camp For Kids” just should not exist.

When I think back to that time it felt so natural to go to a camp where weight loss was the goal. That makes adult Amanda so sad.

What is Fat Camp?

The purpose of Camp Pennbrook was not to build fun-filled memories and friendships, it was to lose weight. If you weren’t losing weight, then they’d push you a bit harder under the guise of “fun” all the while making you feel like your parents didn’t spend all that money for you to attend and not have the numbers go down on the scale.

I think in part my innocence and naivety saved me the weeks I was at weight loss camp but I’m sure there was an impact that I’m still unpacking. Years later this is what I remember about my time at Camp Pennbrook:

I had two roommates during my time at weight loss camp. I found letters from C she was from Greenwich. I never heard from her after that summer but in the 4 letters she sent (two a week for two weeks) I got glimpses of what I could expect when I got home and it scared me.

Because C told me that she was gaining the weight that she had lost at Camp Pennbrook and she couldn’t stop snacking. Her mom was annoyed. She signed off each letter wishing me fun and asking how much I had lost since she left.

I also found postcards from my mom, short and to the point but they all ended the same. Wishing me fun and that she was proud of me.

I didn’t tell many people I was at weight loss camp and so relied on the almost daily postcards from my mom and weekly calls from a phone booth.

It was so long ago but I remember I bought a VHS the kickboxing instructor made and sold to us for $5. I kickboxed almost daily when I got home from Camp Pennbrook until life got real. I am sure I gained all the weight I lost before school began.

I couldn’t tell you if I learned about nutrition at all as I can’t remember those conversations. Maybe they happened and I was a kid and didn’t care or maybe it was a bit more about the activity and calorie deficit they had us on.

What I can tell you is that for the first time in my life I was surrounded by girls who looked like me and who I could have shared clothes and laughs with. Although I was surrounded by all these beautiful girls we were all there for one purpose, to lose weight. We were there because society told us we weren’t good enough. The next time I would be in a group of girls who looked like me wouldn’t be until nearly 20 years later when I and the other Fat Girls Guide writers met in New York City.

We had a clothing swap, ate out, and laughed. It was magical. Which is why I’m so fucking happy that the term Fat Camp is being reclaimed and turned into a fat-positive safe space. Hosted by Annette, the founder of Fat Girls Traveling. Let’s go to Fat Camp, shall we? Sign up for the next one here.

In the interest of full disclosure, this conversation occurred after I was 90% finished writing this post but I felt it was important to share and learn more about how I got sent to Fat Camp.

I am not going into full detail as it’s not my story to share but that summer was a tough one for my mom. There was a lot going on in the background and as an adult, I sympathise with her. She is and was doing the best she can and told me she regrets sending me there but she thought I had fun. Here is the thing, I am sure I did have fun and one thing that truly became clear to me in our conversations was that it was truly a product of our time but also a lack of communication.

My mom remembers me being bullied about my weight but I remember just feeling insecure about my weight. I don’t ever remember anyone being mean directly to me about my weight. I just knew I was bigger and that I didn’t have trendy clothes because I couldn’t fit into the Sofitel cloth shorts and felt uncomfortable wearing sleeveless shirts. My confidence was at an all-time low, combined with a time of turbulence and uncertainty in my life it made me sad and I retreated.

I’m sure there were comments made or I picked up on things but I just remember feeling out of place because of me, not because of others. I ended up at fat camp because it was what was agreed as my parents thought it would help me talk about it. My mom was adamant in our conversation she genuinely didn’t care about the weight-loss part. It was more that she knew I wouldn’t talk with her about it as I shut down any weight conversation. But here is the thing… My teenage brother got to go to a french immersion program in France and I went to fat camp. I challenged her with a” well what did you think would happen? It was a camp that focused on weight loss” and she acknowledged that. She touched base that she wanted others to have a conversation about my weight, and not her. I think that was the most painful part for me to hear.

It also reiterates the point that I drew before this conversation with my mother which was… We were and are products of our time. She was doing the best she could but it was a failure on not just her part but my father’s part too. I wish I could write myself a letter to fat camp and tell her it doesn’t matter, to have fun. Move your body because you want to, not because you have to lose weight. Eat the frozen grapes because they taste refreshing on a hot summer day and not because they are a low-calorie snack. That one day, your clothes are going to fit you and you won’t fit into the clothes. But more so, I’m sorry we ever felt like we weren’t good enough. You are. We are. Now and always. 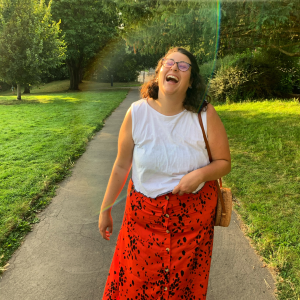